A fourteener is a mountain with a summit elevation of at least 14,000 ft. There are 15 peaks in California that rise above 14k ft, but only 12 of them are considered true 14ers.

A peak is classified to have at least 300 ft of topographic prominence (the measure of high how the summit rises above its surroundings) which Polemonium Peak, Starlight Peak, and Thunderbolt Peak (all in the Palisade range) fall short of, but the climbs are worth it.

California 14ers description summaries below rated by difficulty: easiest to most challenging, and how enjoyable I personally think it is, including technical/non-technical details

I summited some of these 14ers as regular day hikes, some as overnight backpacking trips, some as mountaineering objectives, and some as alpine rock climbs, so my list may vary from the standard list of people who climb the easiest routes, but I’d like to think I climbed some of the best/ classic routes and highly recommend the trails/ routes I’ve done if you have the experience or guide to do so.

The difficulty ranking all comes down to personal preference so what I think may be easier, you may not. I maintain my fitness levels year-round and my summaries below are for someone of decent hiking shape, and totally achievable to anyone willing to train, just as I did to start. I also added a label of hike or technical, hike indicating there’s a normal hiking trail, and technical indicating scrambling/ climbing/ mountaineering and the need for some sort of mountaineering or climbing gear (and of course, proper use of how to use them).

For more details and route options on climbing peaks in the Sierra Nevada, check out Secor’s The High Sierra – it’s the guidebook I use.

White Mountain is the easiest hike of all the California 14ers because there is little elevation gain, it’s just long. It’s a bit of a drive off the 395 and the trailhead can be accessed by AWD cars. This hike is unique and beautiful because it offers very different views than all of the other CA 14er peaks since it’s in the White Mountain Range, so you’re looking across at the Eastern Sierra from the summit. There’s also cell service up at the summit and I hear the trail is always windy.

The Whitney Trail is absolutely beautiful and best done as an overnight hike for your first time so you can enjoy the views and acclimate if you’re not used to high-altitude hiking. Hiking Mt. Whitney is no walk in the park but if you put in the work and train for it, it can be just as easy for you as well.

The mountaineer’s route is more challenging for the average hiker and requires knowledge and proper use of ice ax and crampons.

The hike to Cottonwood Lakes is beautiful, but the last 3 miles after New Army Pass was a slog. It was long and all boulders. I used to think Mt. Whitney had the longest two miles of your life, but Mt. Langley felt longer to me.

Mount Langley vs. Mount Whitney: They’re physically close in the Sierra Nevada mountain range and probably two of the more commonly sought-after beginner-friendly CA 14er hikes. Most people will say Langley is easier than Whitney due to the difference in elevation gain, but I ranked the Whitney Trail as easier than Langley because of the terrain. Langley has a lot of boulders/ sand at the end (Whitney does too but it’s a clear, flat-ish trail for most of that), but Whitney does have significantly more overall elevation gain so keep that in mind. Whiney just has more variety of beautiful views throughout the hike which made it more enjoyable as well, but the summit views from Langley beat Whitney in my opinion.

Climb Mt. Muir when you hike Mt. Whitney! I tagged Whitney for the 5th time just so I could come up Mount Muir… I’ve thought about it on previous trips but was honestly too scared, lacking off-route trail finding experience before, and it didn’t seem worth it at the time. After I set my eyes on knocking out all CA 14ers, I had to return to the hike that started it all and finding my way up to Mt. Muir was easier and shorter than I expected. As long as you know where to turn off & where the peak is (do your research ahead of time), it’s easy-moderate scrambling off Trail Crest and relatively short.

Avalanche Gulch is a winter mountaineering route, totally doable for beginners who know what they’re doing. It’s not technically hard, it’s just a lot of elevation gain and long. I can’t imagine it to be fun slogging up the huge talus/ scree-field when there’s no snow so time it with the Spring snow season if you know how to use ice ax and crampons, or find a different route up.

Split Mountain is not technically difficult, but I personally struggled a lot with the hike to Red Lake – it was hot, a lot of ups and downs and sand, and just one of those days. The scrambling after Red Lake was fun and chill! The trail has little tree coverage, requires cross-country hiking and good navigation skills.

This one is fun and the scrambling section is a lot shorter than I expected. The hike to Finger Lake is a bit more strenuous but it’s a great spot to camp before if you have permits. The red rock section had some loose rocks so be mindful of your surroundings.

The East Ridge of Mount Russell is said to have the finest rock in all of the Sierra… and I definitely agree! The trail to the top of Russell-Carillon Pass sucks and it’s a long day, but the ridge is fun, fully exposed, and adds a bit of excitement if you’re scared of heights like me. You’re able to stay just off to the right side of the tippy top of the ridge if you’re not comfortable with the ridge.

Tag this one with Williamson. Shepherd Pass is long but after the first three miles of uphill hiking, it was easy hiking to reach the pass.

The approach from the top of Shepherd Pass was short. We scrambled a mix of the North Rib and the Northwest Ridge route – we may have gotten on a different rib too early to connect with either the NW Ridge or the summit ridge, and came down the North Rib but whatever we did, it was easy to find a way up to the ridge from the class 3 side. The entire climb was faster and easier than expected. The summit ridge is really fun and not too long.

Mount Williamson is the second highest peak in California. From the top of Shepherd Pass, it takes a bit of route finding through the Williamson Bowl to reach the bottom of the gully. There are a lot of dead-end chutes on the West Face of Williamson so do your research ahead of time. The chimney isn’t hard if you’re an experienced climber. After getting above the chimney, there is still a short bit of traversing and scrambling to reach the peak but it’s relatively easy boulder hiking from that point. Overall, it’s a long one but not technically challenging.

Palisade Traverse blog is coming – subscribe to my newsletter to be notified of new blog post alerts.

We did the Sill to Thunderbolt Traverse which made it easier to summit all 5 14ers off of the Palisade Crest. From East to West, the peaks include:

Our approach to Polemonium Peak was from Mt Sill, and Polemonium was the easiest and shortest of the 5 peaks to reach.

I’ve done both a snow and rock route for Mt Sill… neither was easy, and the Glacier Notch on the approach from Big Pine Lakes/ Palisade Glacier was loose and challenging for me, both in dry conditions and with snow. In fact, I almost turned around at that point both times because I was scared with no rope… and eventually got on rope both times.

The couloir is short and easy but the climb doesn’t stop there. There is a traverse in the snow after to reach the class 3-4 scramble section that is a bit exposed. I found this scramble to be more challenging with snow present in my crampons.

The rock quality is good so the climb was mostly not challenging, but there is one section right before the crux that is extremely exposed and scared the living crap out of me. As someone terrified of heights – I feel the need to warn you about this. If you trust your lead partner, don’t think – just go. You’ve made it that far and you’re not turning around anyways so take the leap of faith. Will write about this more on my upcoming Palisade Traverse blog.

North Palisade is the 3rd peak on the Palisade Traverse. The chimney climb was fun and easy if you’re a rock climber.

The milk bottle was a bit terrifying. It’s not very tall but when you’re rock climbing at 14k ft, any amount of exposure raises caution for safety.

The summit block is 5.8-5.9 and the hardest of all California 14ers. I honestly struggled. Everything about it scared me once I was on the summit block; all of my fear of heights and irrational fears of swinging like a pendulum came flooding back to me. I needed help getting up and I’m not ashamed to admit it! I only started rock climbing a few months before this and it was hard climbing for me, even on top rope. The scramble approach was not technically hard but there was a steep climb from the saddle between Starlight and T-bolt, and the summit block was challenging – my partner chose to tackle it from the arete in the back right (in photo) which I believe is less common and more exposure, and I went up the right face of the wall. 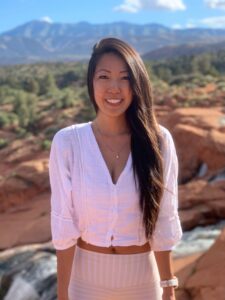