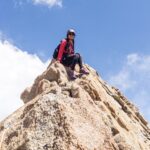 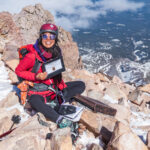 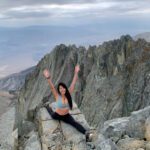 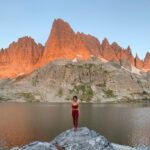 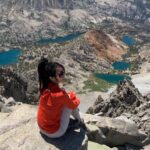 The previous weekend, I attempted C2C and was 3 miles shy of the summit when we had to turn around due to a late start and lack of time. The weekend before that, I attempted Mt. Whitney and turned around at the beginning of the switchbacks because it was too cold and one of my feet was numb. C2C is a harder/longer trail but Iron Mountain takes the cake on being SoCal’s hardest hike as there are many easier trail options to get up to San Jacinto Peak… as opposed to Iron Mtn.

I was determined to make it to the summit of Iron Mountain this time (sometimes called “Big Iron Mountain”) – my body felt like it was at its peak for the first time this year. With Covid-19 closures and all the wildfire closures, my stamina has been low – I’m still getting out often, but the exercise level just isn’t the same – the lack of gym access doesn’t help either as I used to workout every day to maintain my endurance for the trails.

Please note that every tracker varies in it’s recording details and although most blogs will say the trail is roughly 7-7.5 miles one-way with 6600-7200 ft elevation gain, this write-up is based on my tracker which comes in at 6.9 miles one-way and 6856 ft gross elevation gain

We started at 6:16 am in the dark and caught the sunrise on the trail. The trail starts on the wide, flat, East Fork Road for about half a mile before you take the Heaton Flats Trail on your right. The Heaton Flats trail starts with an incline so we were able to un-layer all the way very quickly – it’s been a warm and dry December in LA. The first 1.2 miles on this trail climbs 989 ft before reaching the first open section which we arrived at 7:02 am (1.7 miles from the trailhead). Now, you enter Sheep Mountain Wilderness.

The trail continues up and down (but mostly up) along the ridge for 2.41 miles with 1694 ft elevation gain until you start the 0.25-mile descent to Alison Saddle, with an elevation loss of 149 ft. Alison Saddle is about 4.38 miles from the trailhead and sits at 4571 ft. Some people choose to stash water here for the return hike, but it’s a good spot for a break regardless as the climb ahead of you is strenuous.

From the peak of Iron Mountain, you get 360° views with Mt. Baldy to the West, Rattlesnake Peak to the East, and the San Gabriel Mountains all in-between.

It took me 4 hours 37 mins to hike to the top. Getting to the saddle was surprisingly easy on my body because I made sure to be constantly snacking on my oat bars at least every hour (even forcing myself to eat when I’m not hungry) and the strenuous hike from the week before also helped train my body, but the last 1-1.5 miles is when I really started to feel the burn – I guess it’s true what they say, the last two miles are the toughest. The last mile alone has an elevation gain of 1316 ft (the last two miles has a total elevation gain of 2612 ft)!

If I’m being honest, the terrain was better than I expected. Everyone says that you fall a lot of this trail so I was expecting it to be a lot worst, but I’d say only from the saddle and 2 miles after are the slipperiest parts – don’t get me wrong, it’s all super steep going downhill and killed my knees, but those two miles were really bad (I hiked down super slowly).

Gear I used on this trip:

Fall in love with taking care of yourself. Fall in

Just got home and already planning my next trip ba

Today marks the one year anniversary of the first

Do you ever feel like it's colder or hotter than t

First time ice climbing during sunset… it was fr

A passion whose flame failed to be fanned eventual

Mountains, according to the angle of view, the sea

Snow + desert = my favorite place to be in the win